The mules are using modified Toyota Tundra bodies, with a distinct, downsized footprint. The Tacoma mule’s cab is on the small size—likely using a modified Tundra Double Cab as a starting point (it’s clearly smaller than the Tundra’s Crew Max cab).

Midsize, Not Full-Size
Proof that this is not a disguised, full-size Tundra is found with a quick examination of the pickup bed. The placement of the fuel door—and it’s relation to the cab—says that this mule is fitted with a 5.5-foot bed (which is only available on the the Tundra’s CrewMax configurations). The shortest bed that can be optioned on a Tundra Double Cab is 6.5-feet, which would place the fuel door much farther from the cab. It’s clear that this mule—with its smaller and cab and shorter bed—is designed to test a smaller, midsize truck like the upcoming Tacoma.

Tacoma Appears To Carry Over Tundra’s Coil-Spring Suspension
On This Tacoma mule, Toyota has employed the same camouflage method used on the full-size Tundra—including the sweeper-style camo hanging from the rear bumper. On the Tundra, that camo was used to hide the new coil-spring rear suspension. While we couldn’t climb under this Tacoma prototype for a comparison, what we can see points to a similar coil-spring set-up on the midsize truck. We can’t see any evidence of leaf springs, and the elements of the Tacoma's rear subframe and differential look very similar to what was spotted on Tundra prototypes. It appears that the Tacoma will be getting a refinement bump, using a variation on the new design Toyota has employed to go after the best-selling F-150.

Toyota’s platform sharing strategy should help reduce development costs, and should pay performance dividends for the Tacoma, as it rides the full-size truck’s robust new coattails. 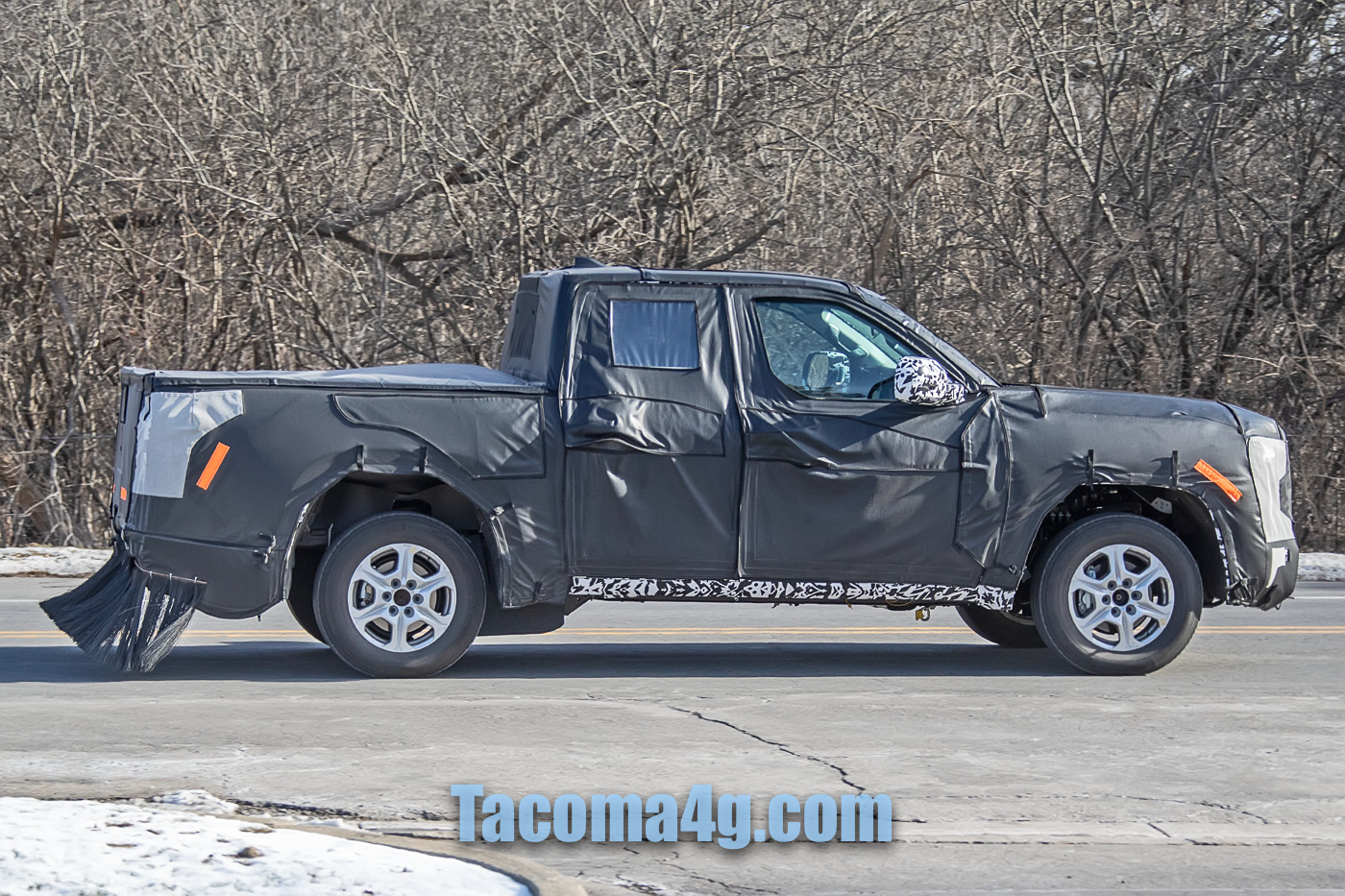 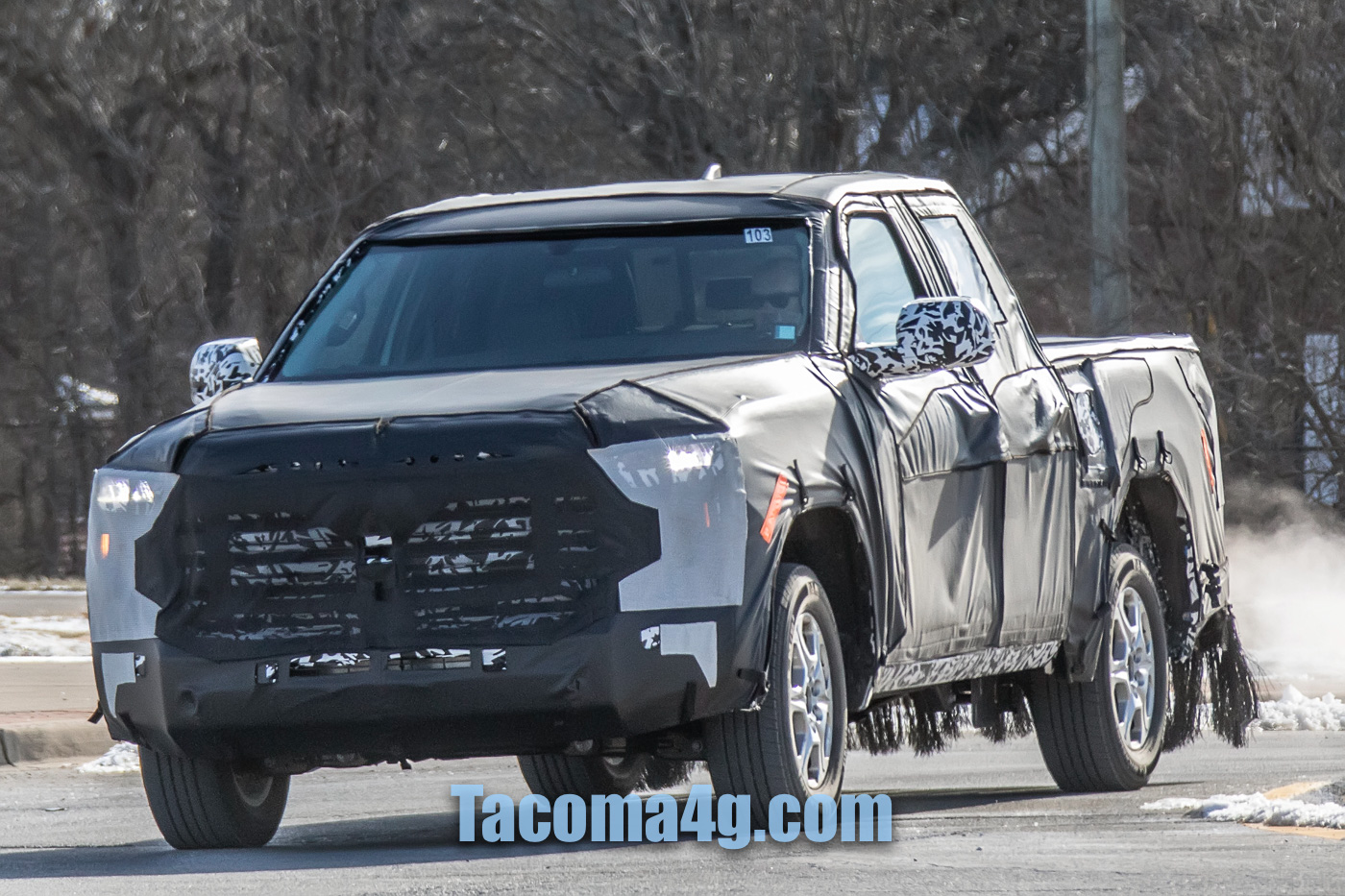 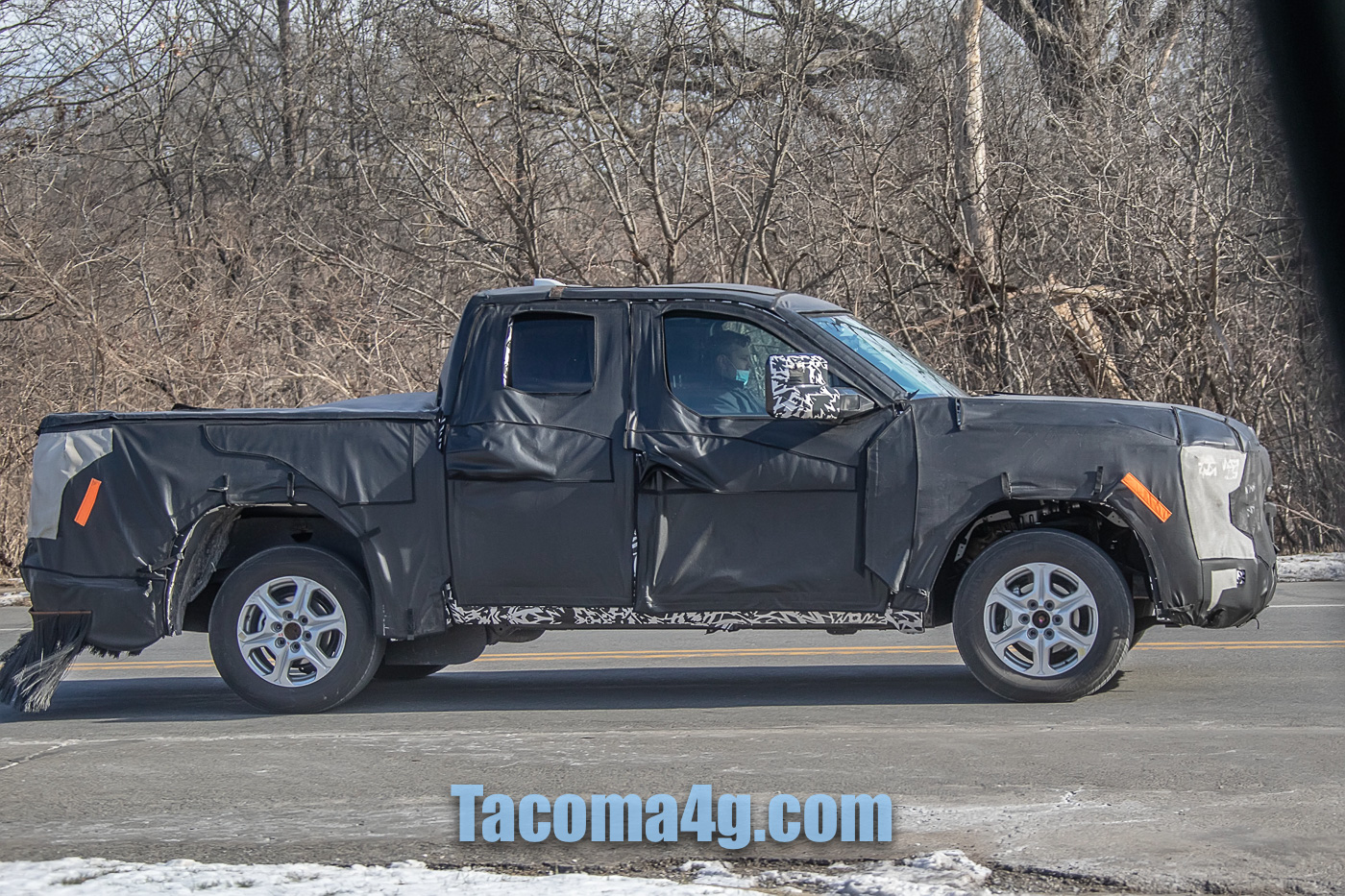 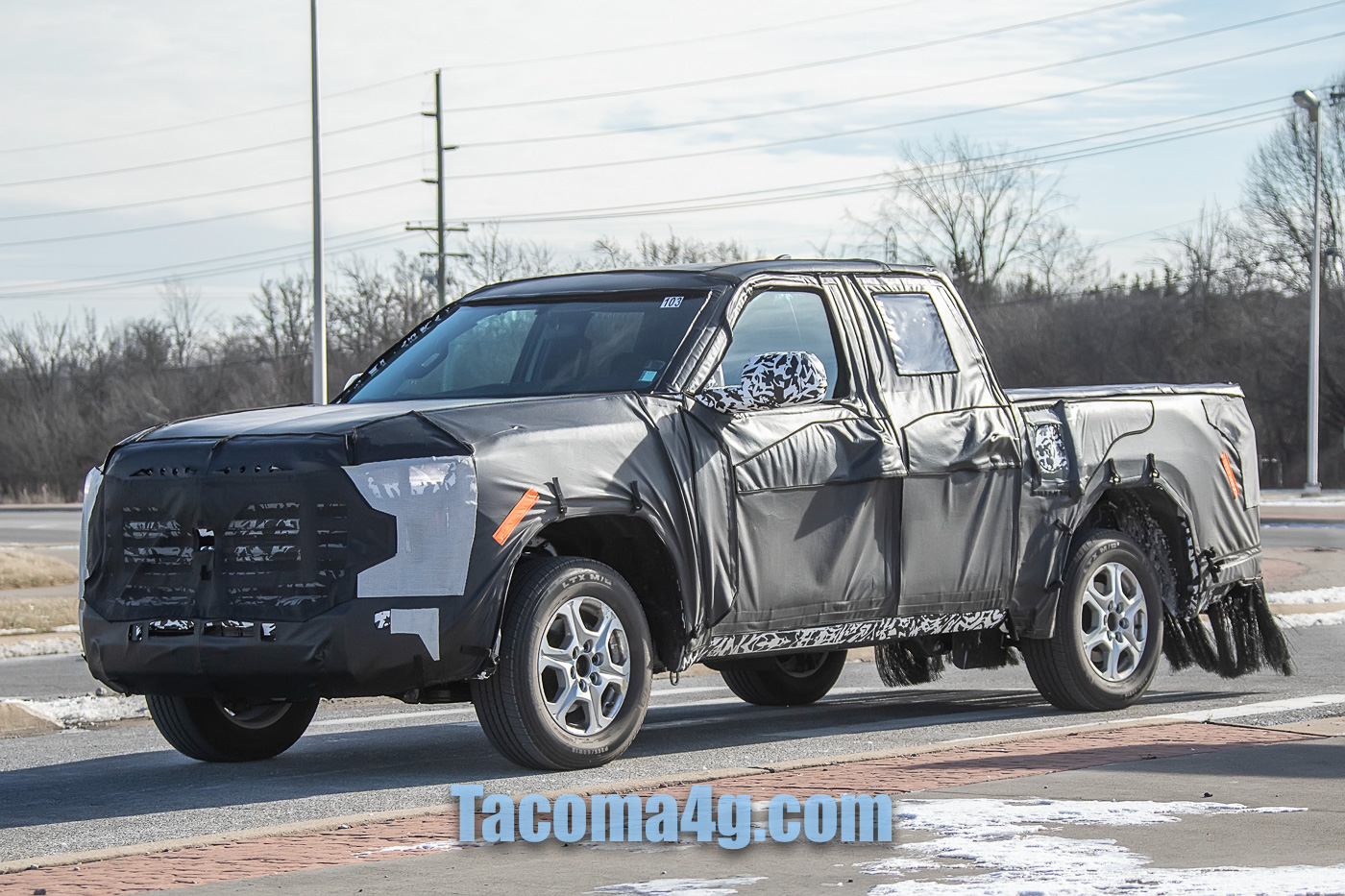 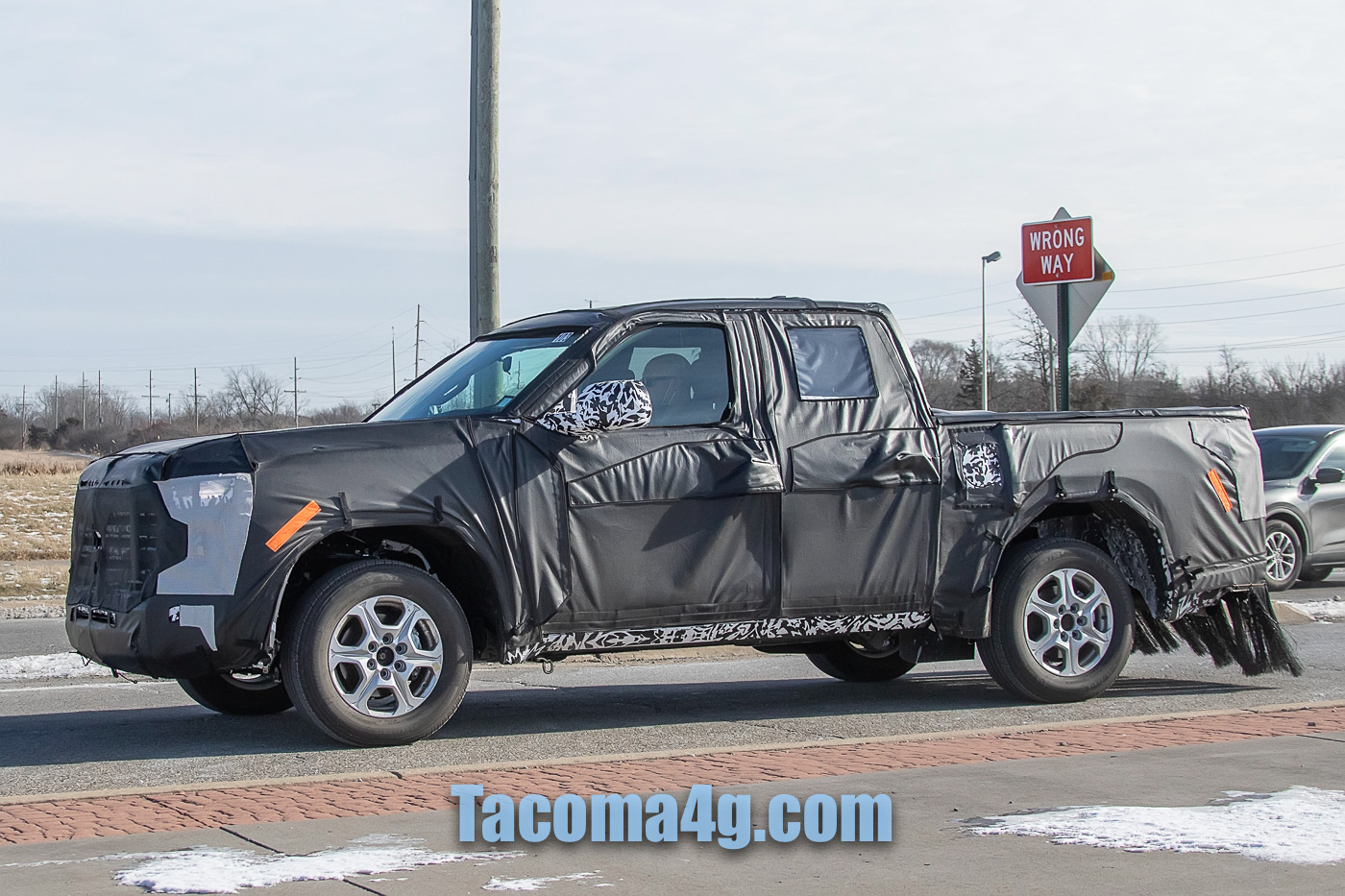 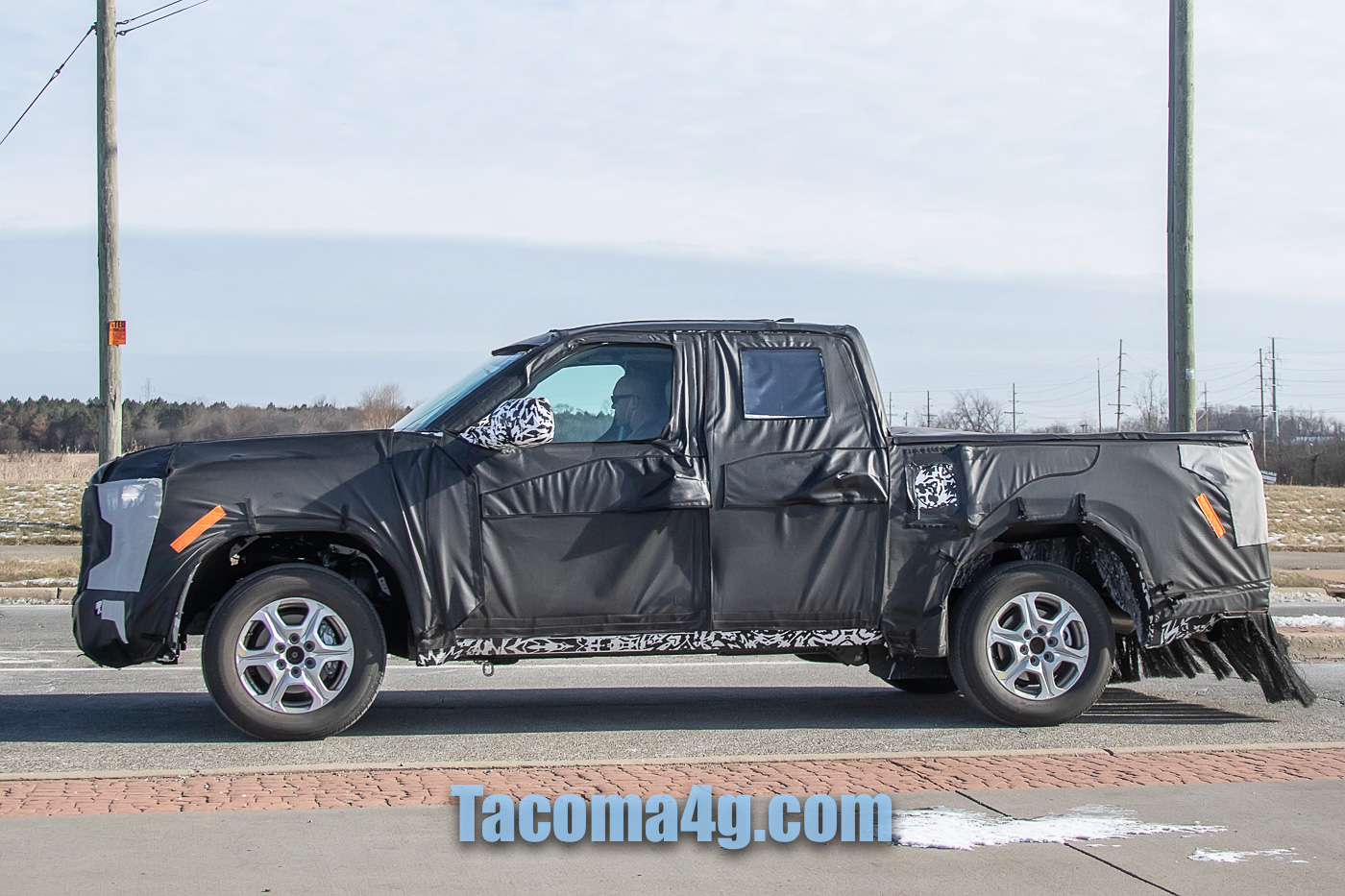 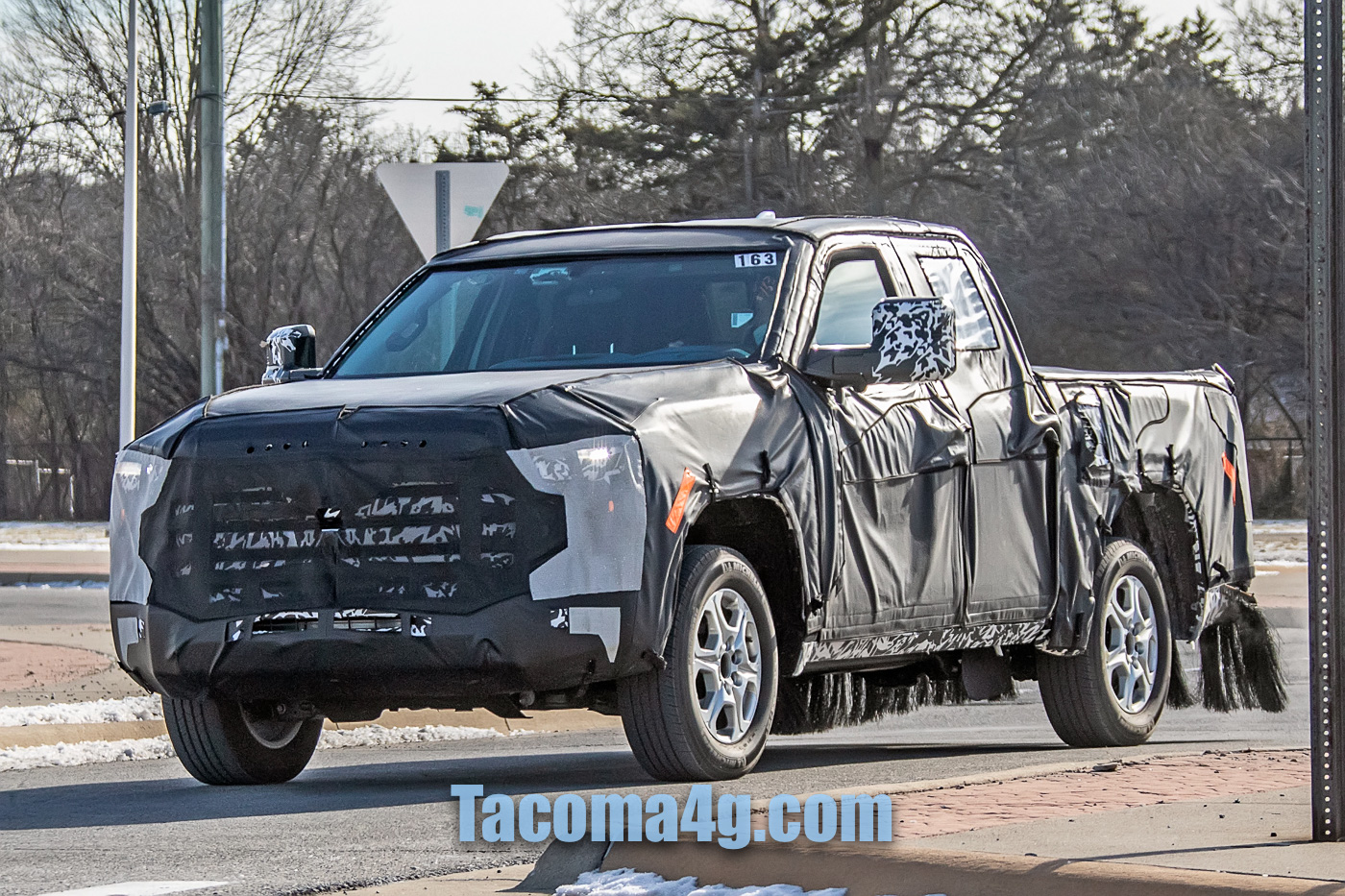 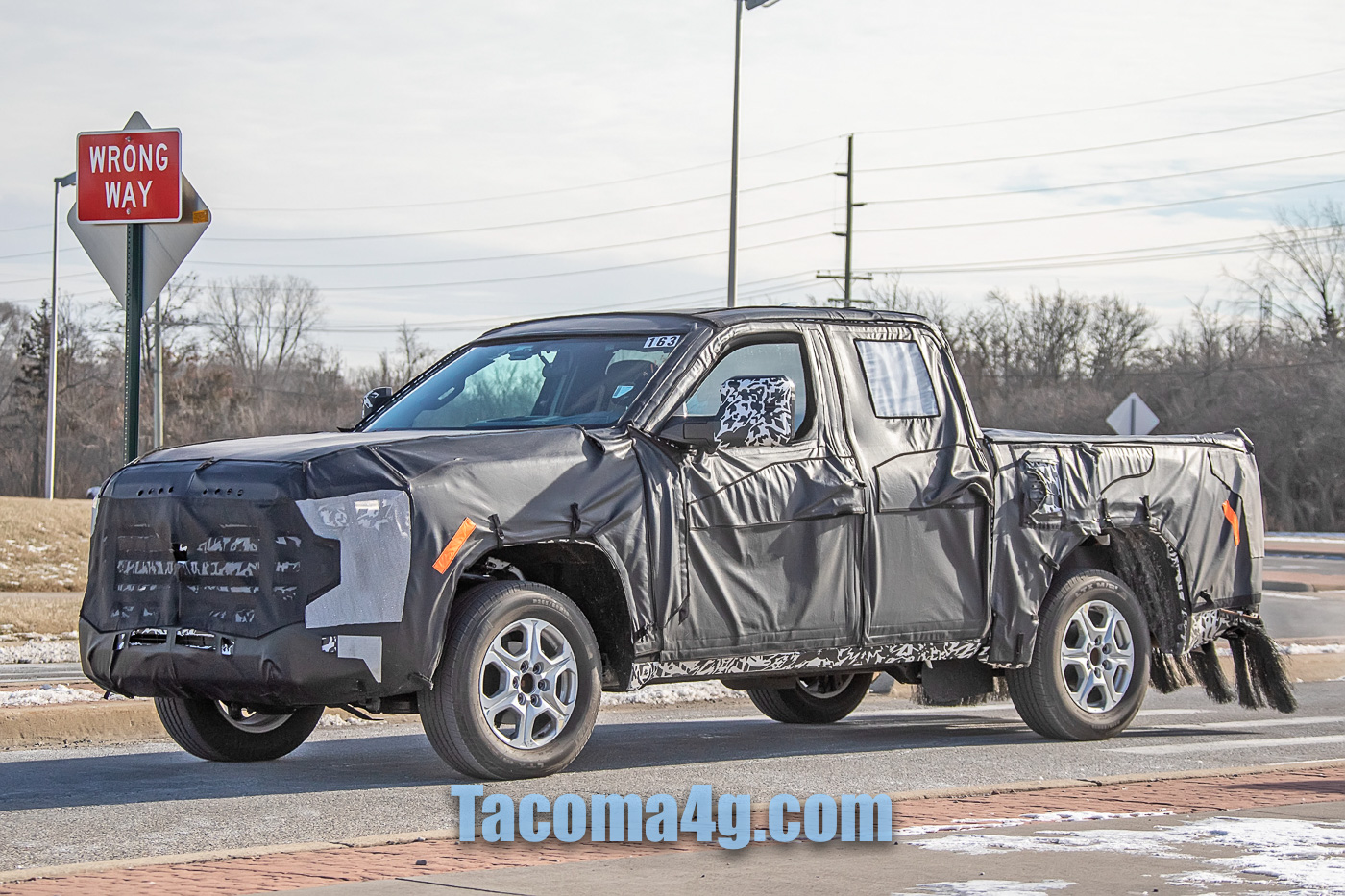 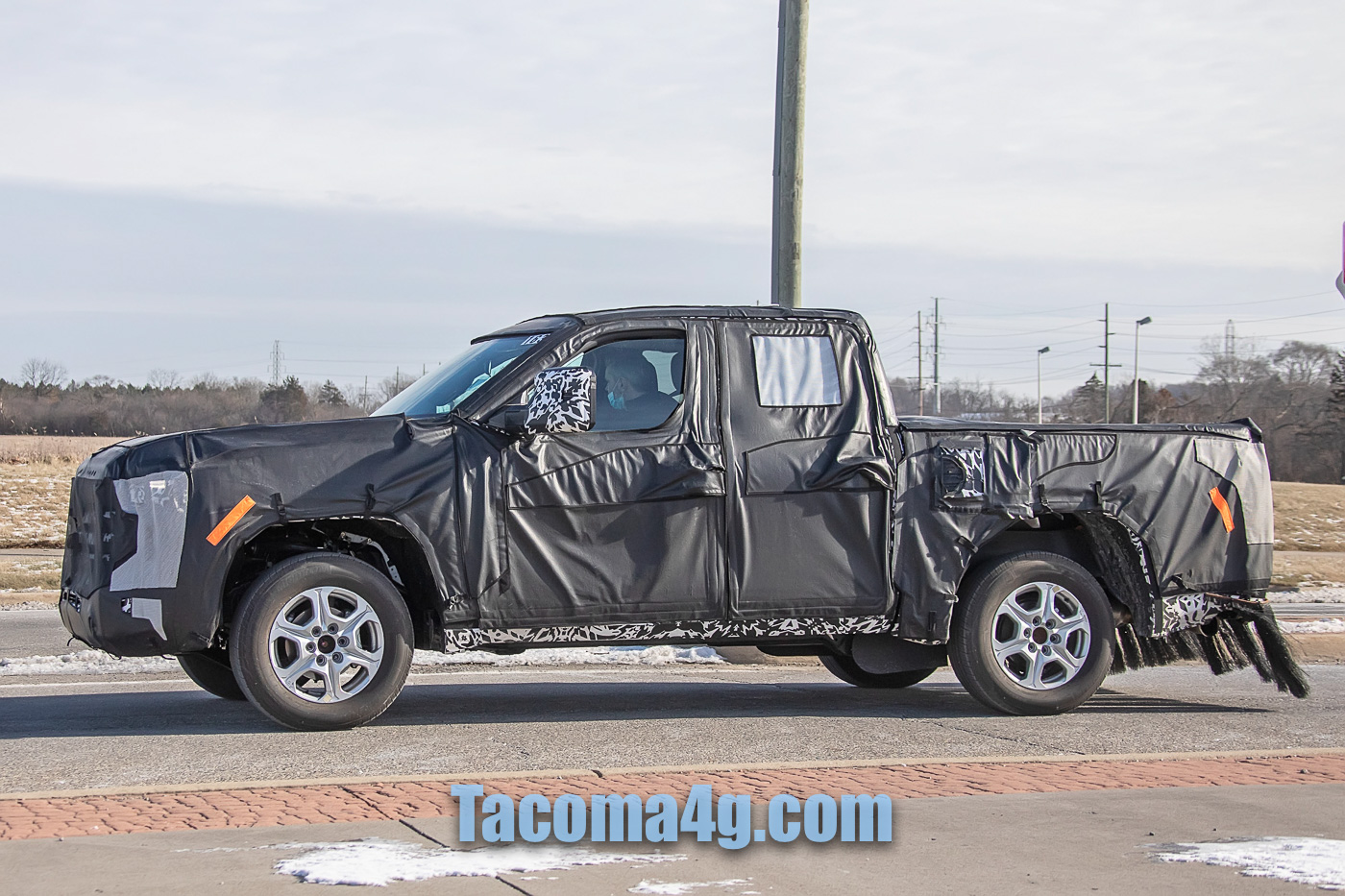 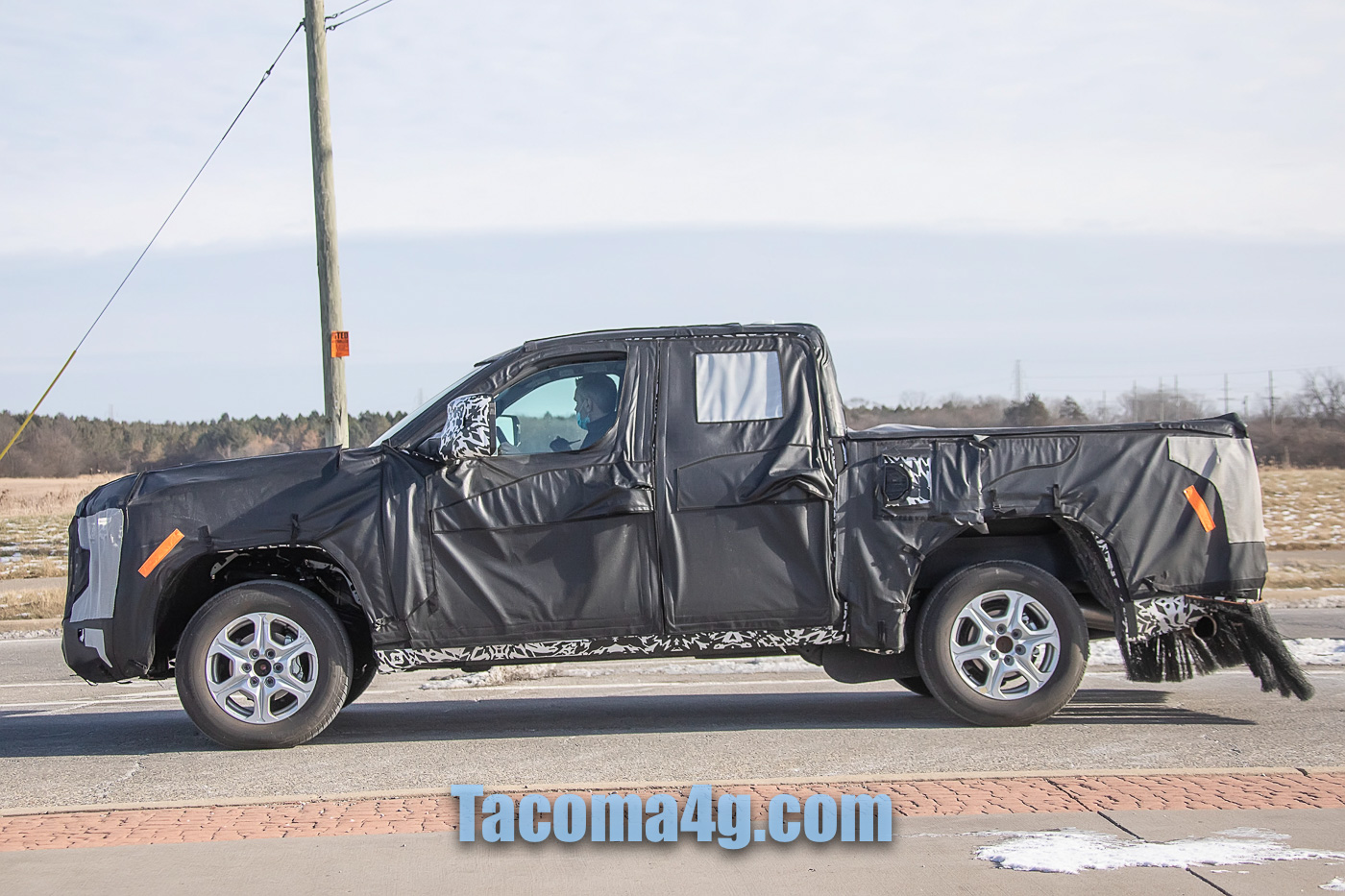 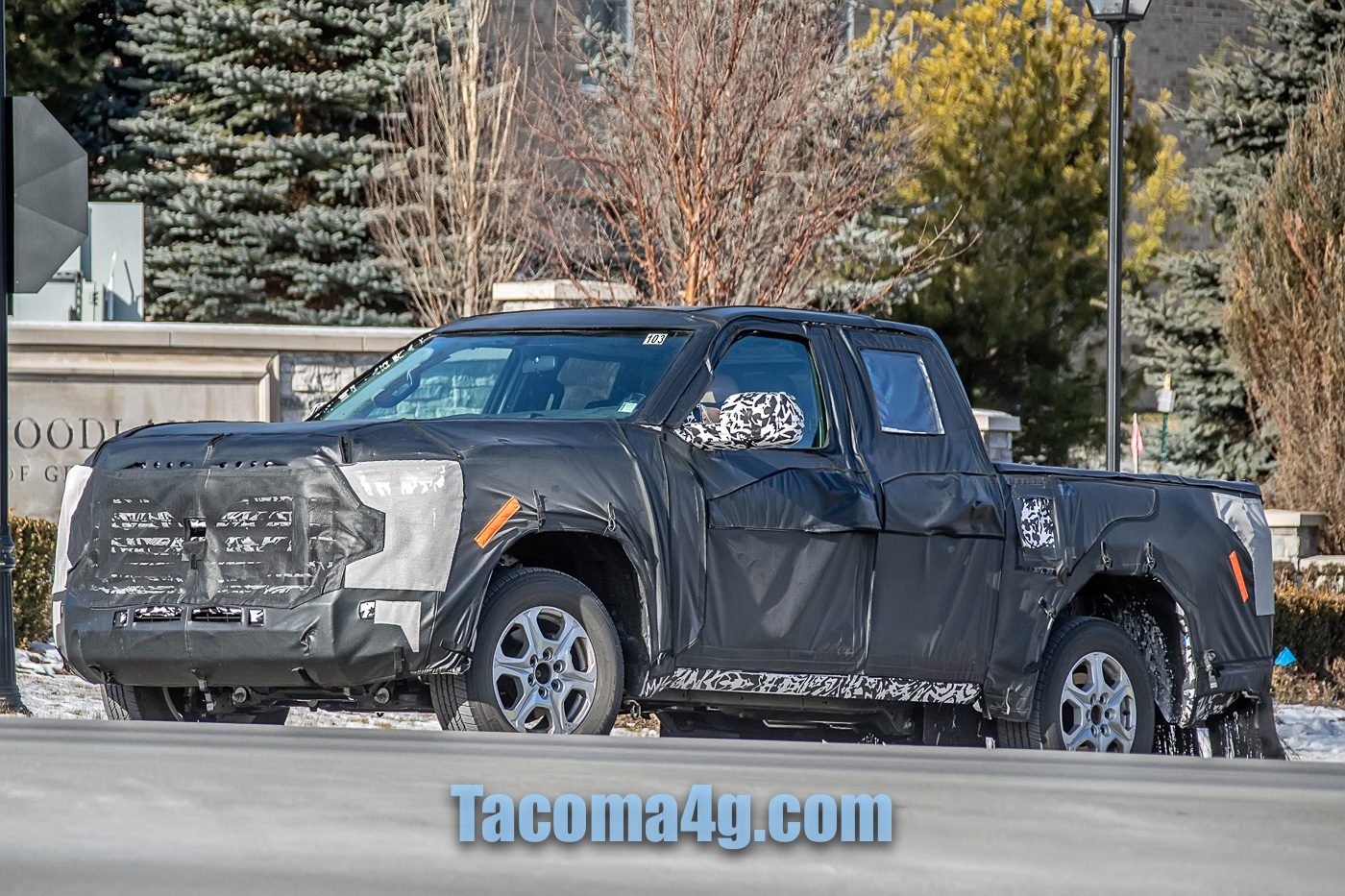 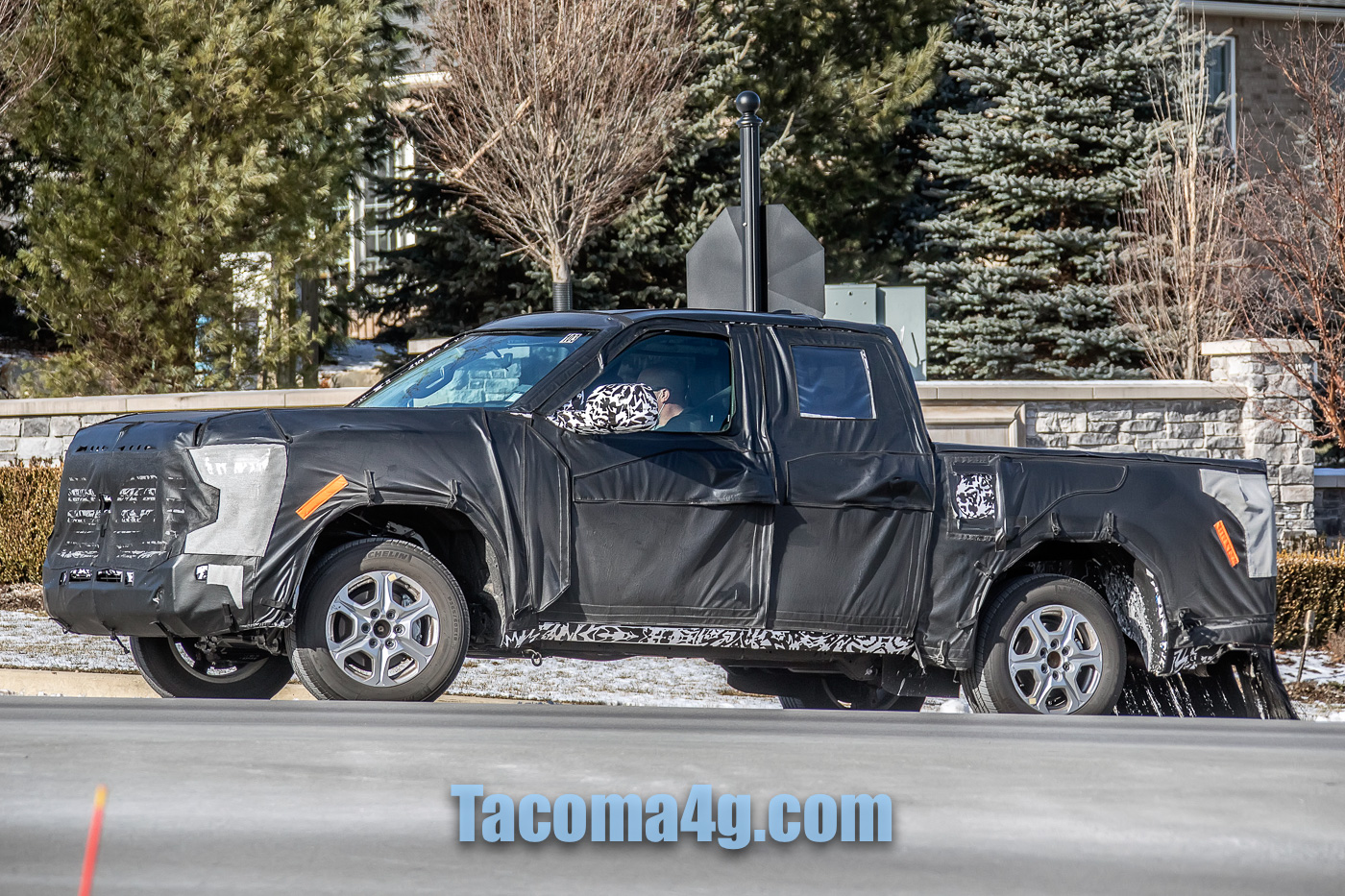 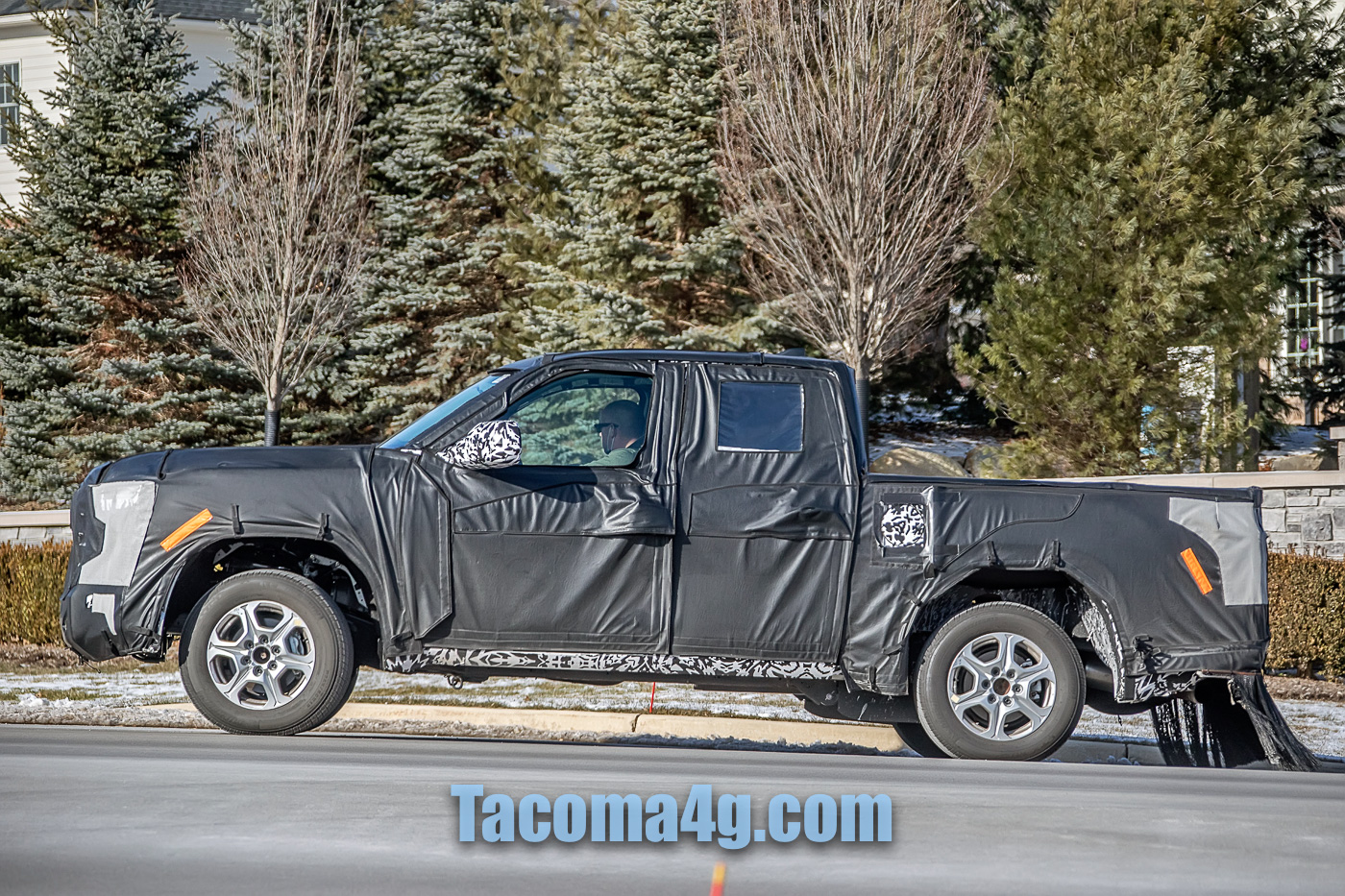 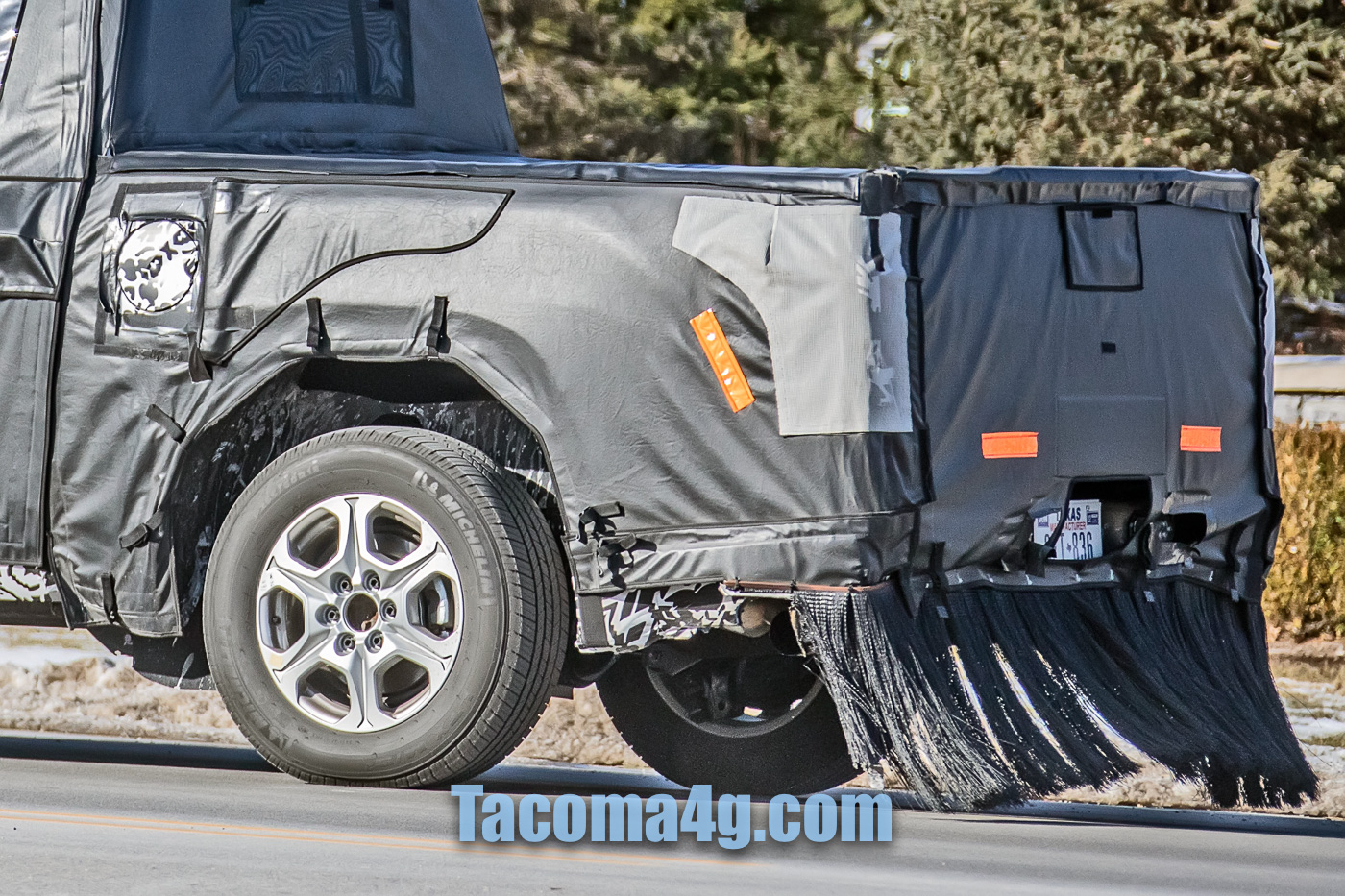 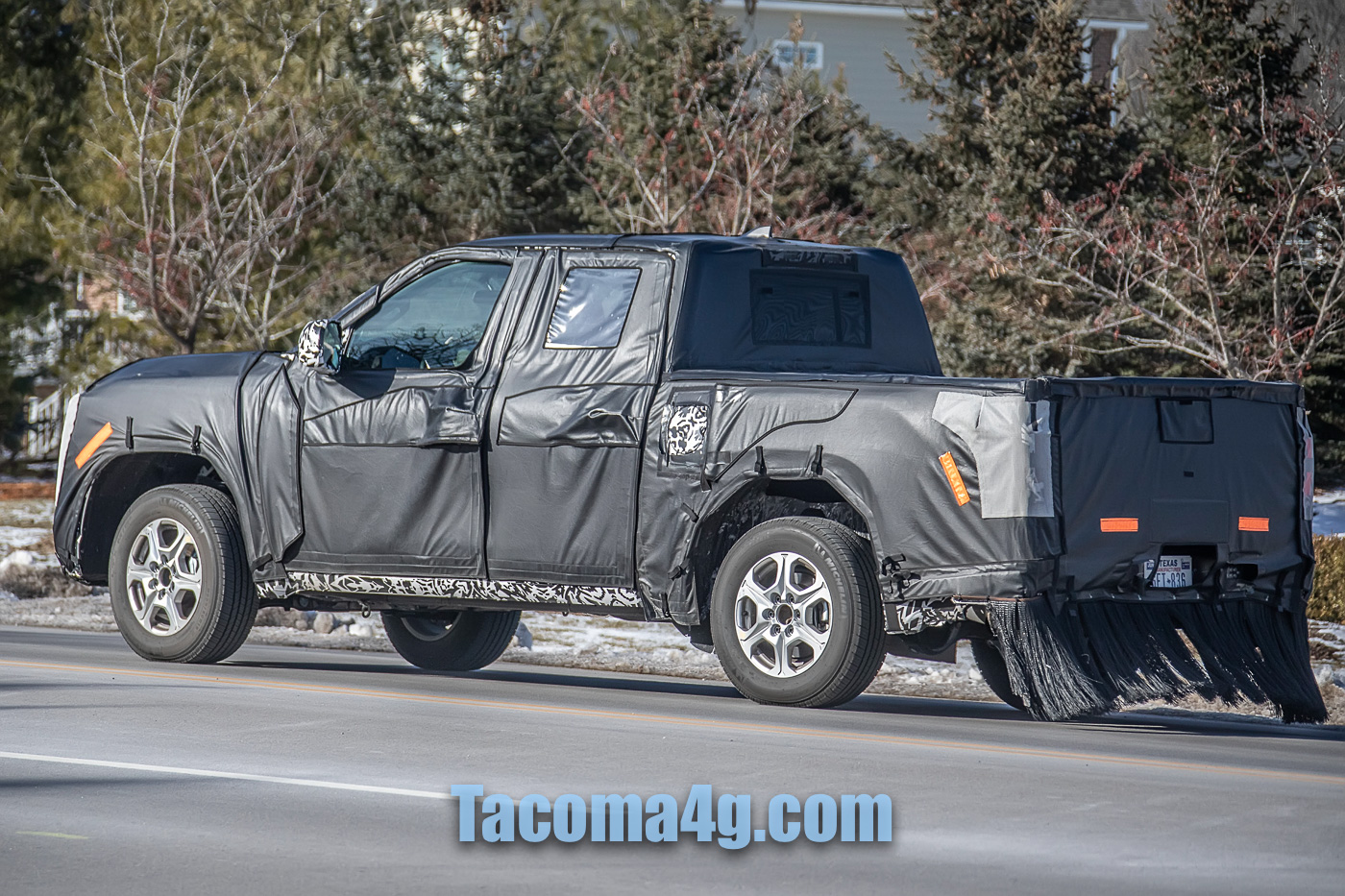 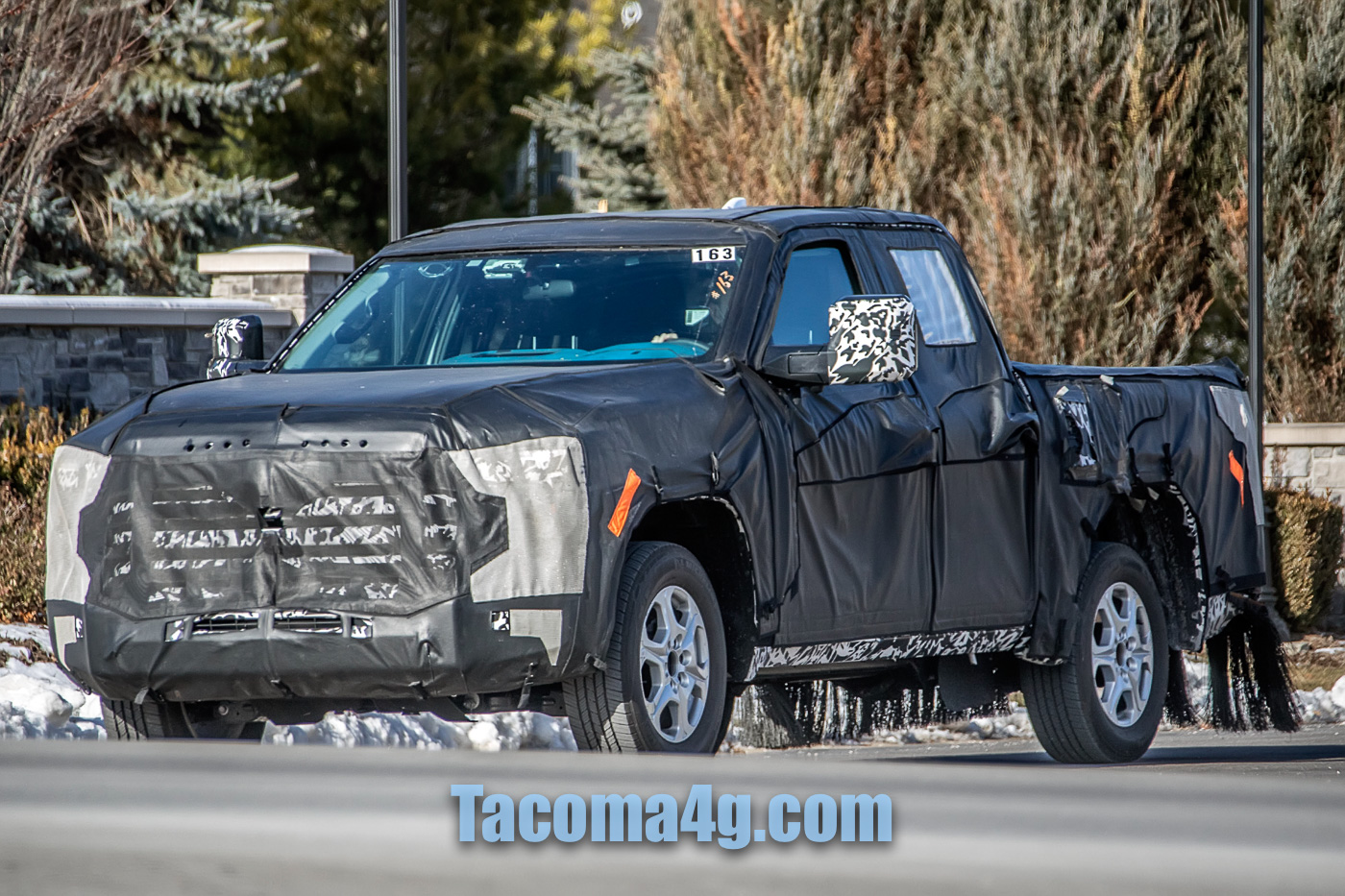 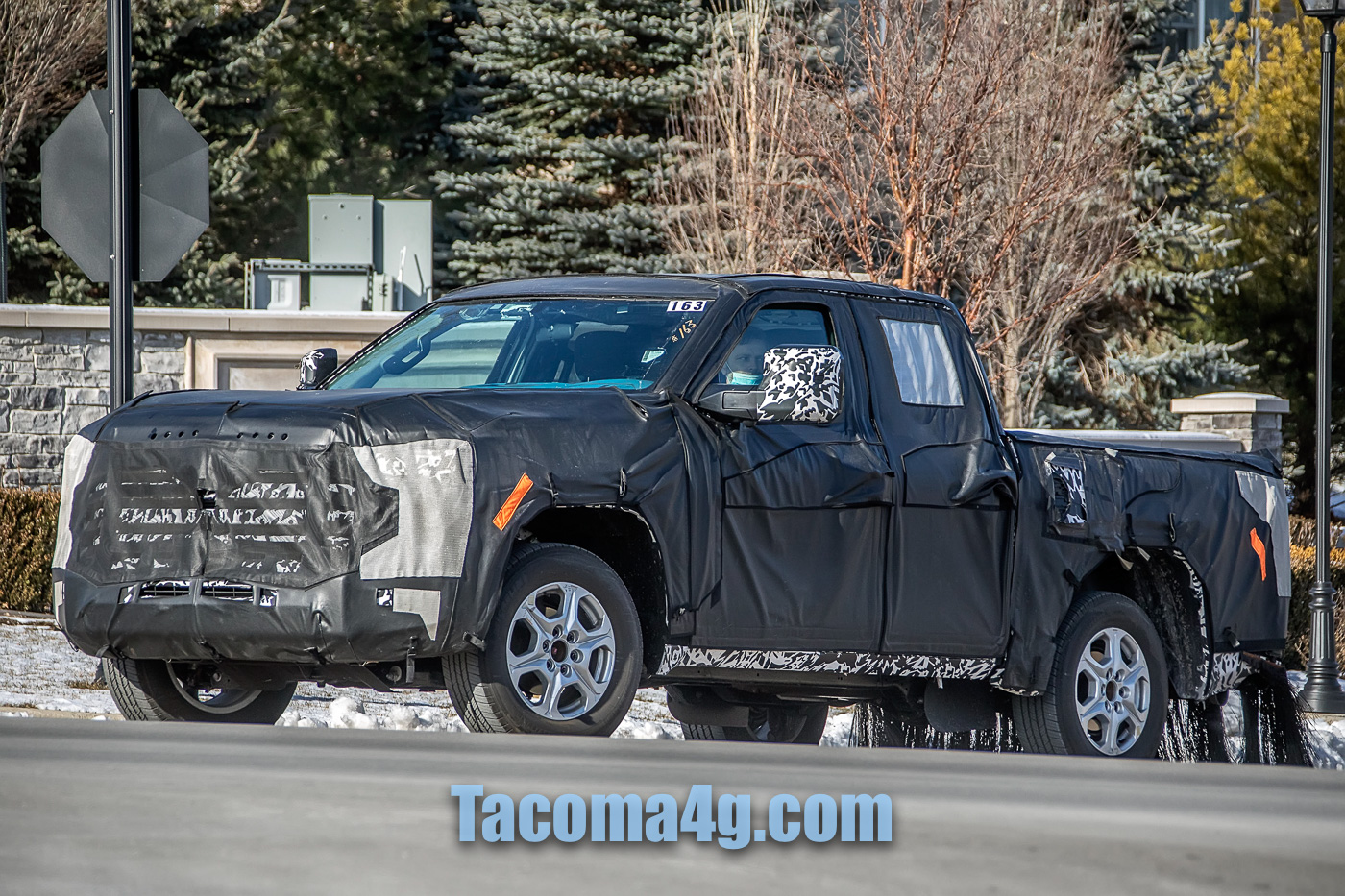 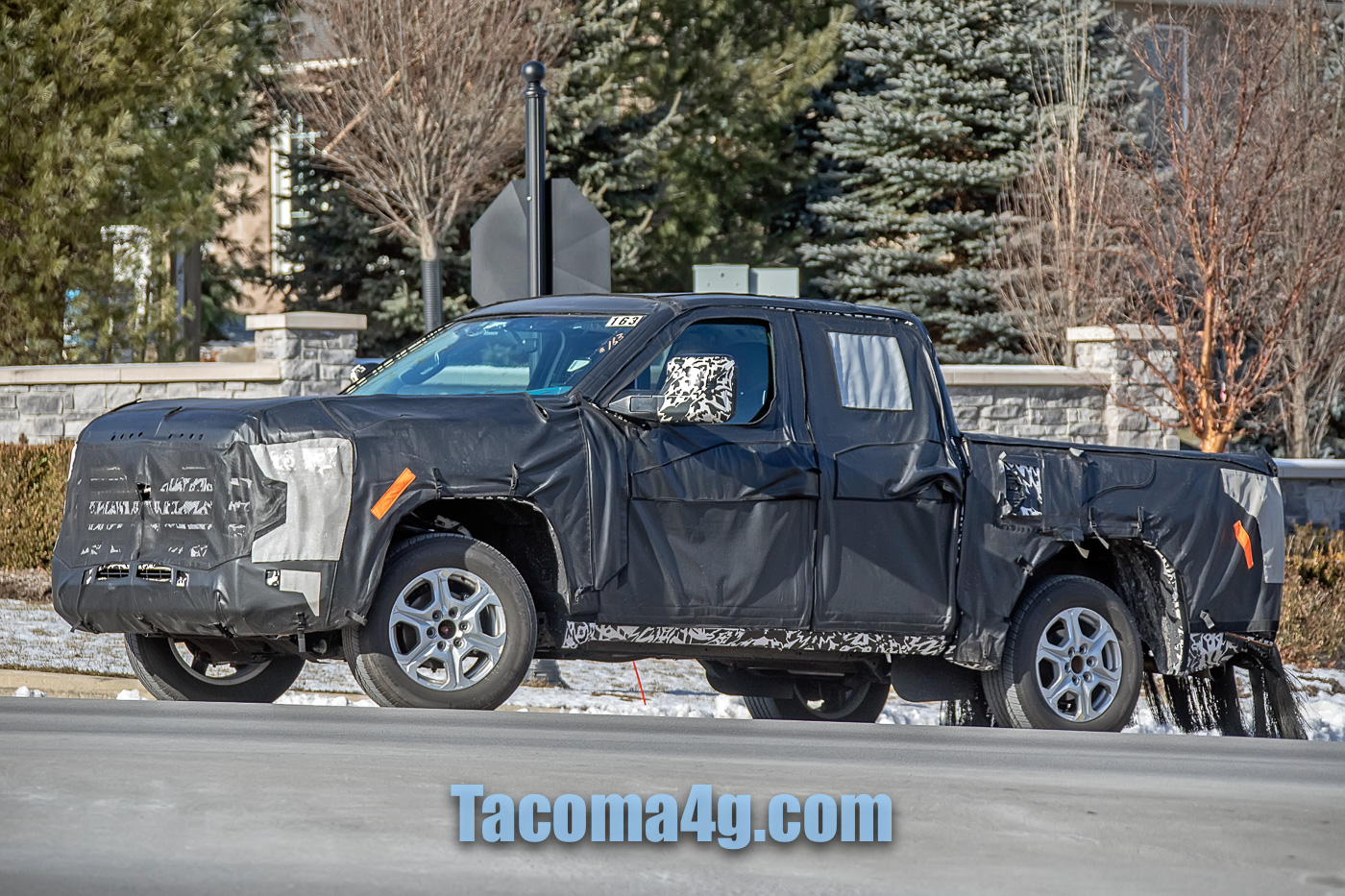 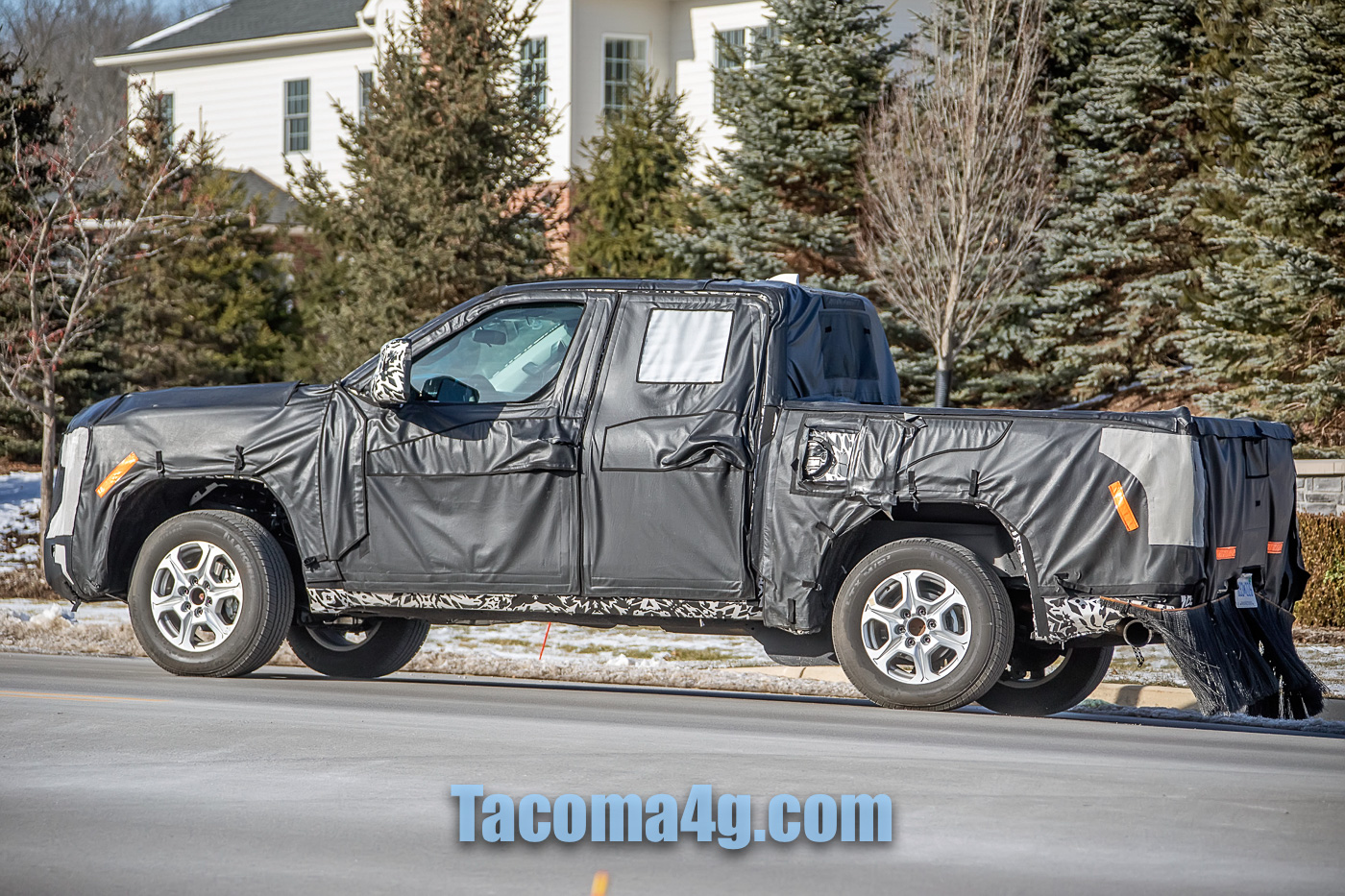 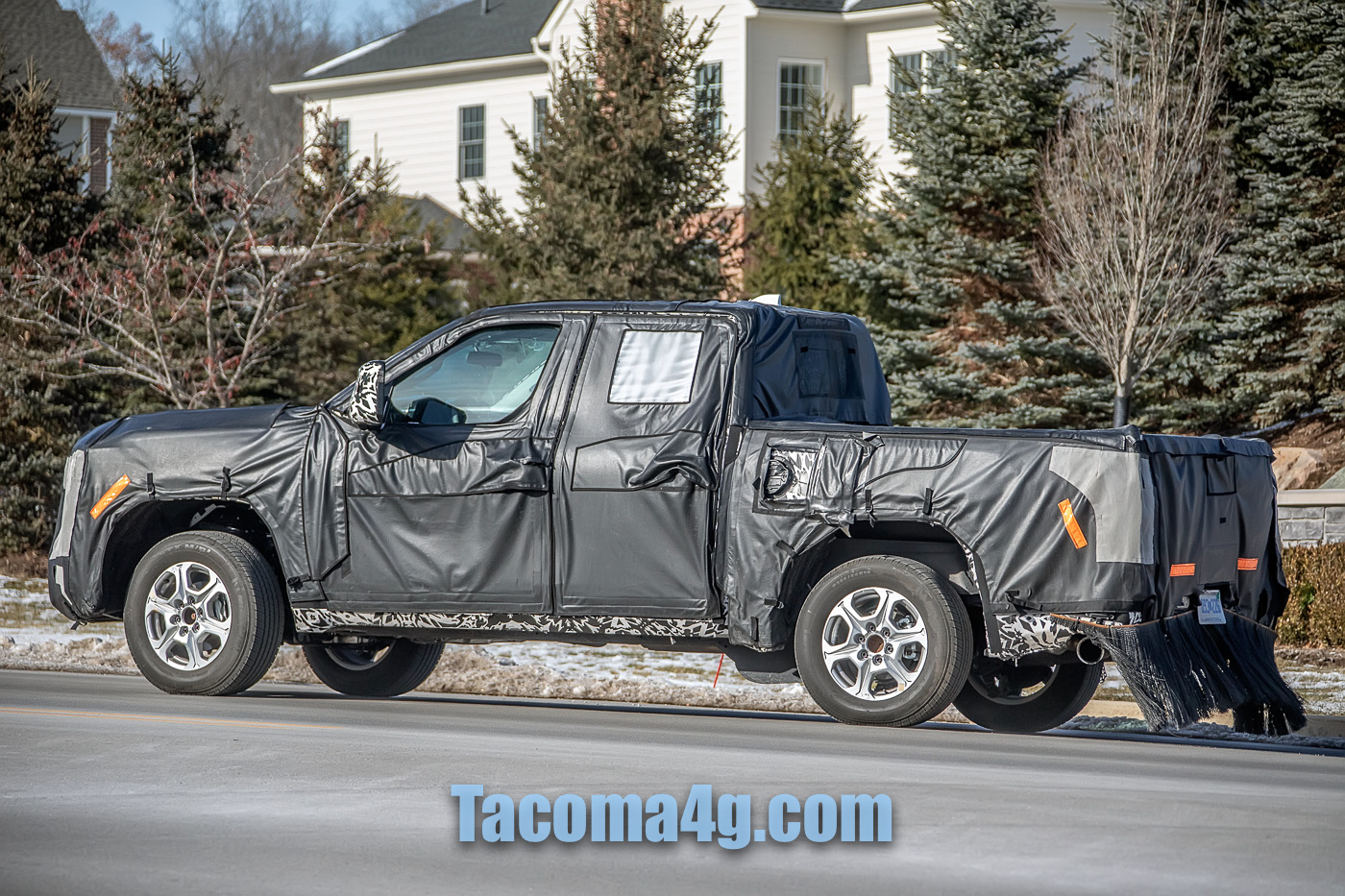 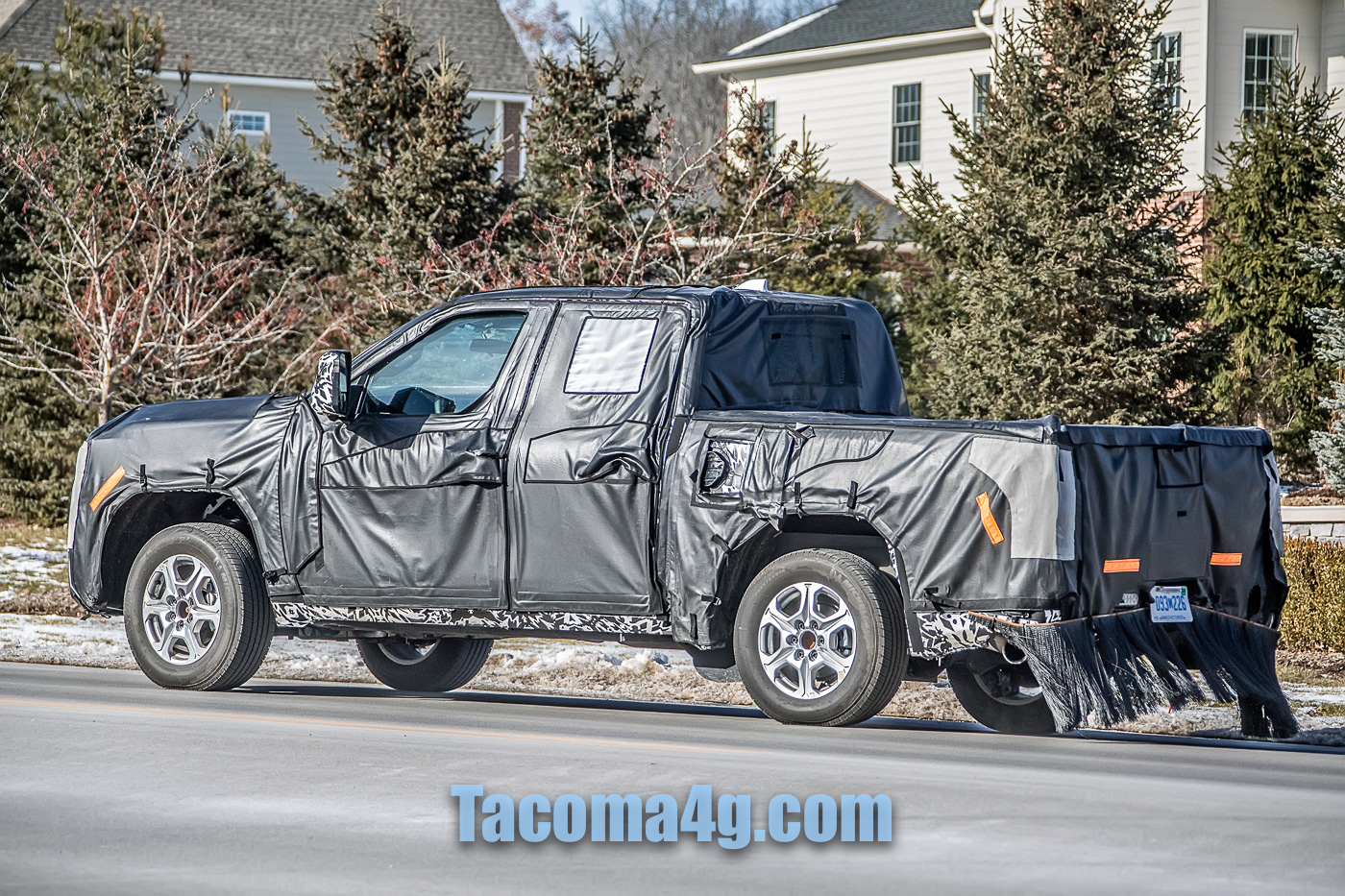 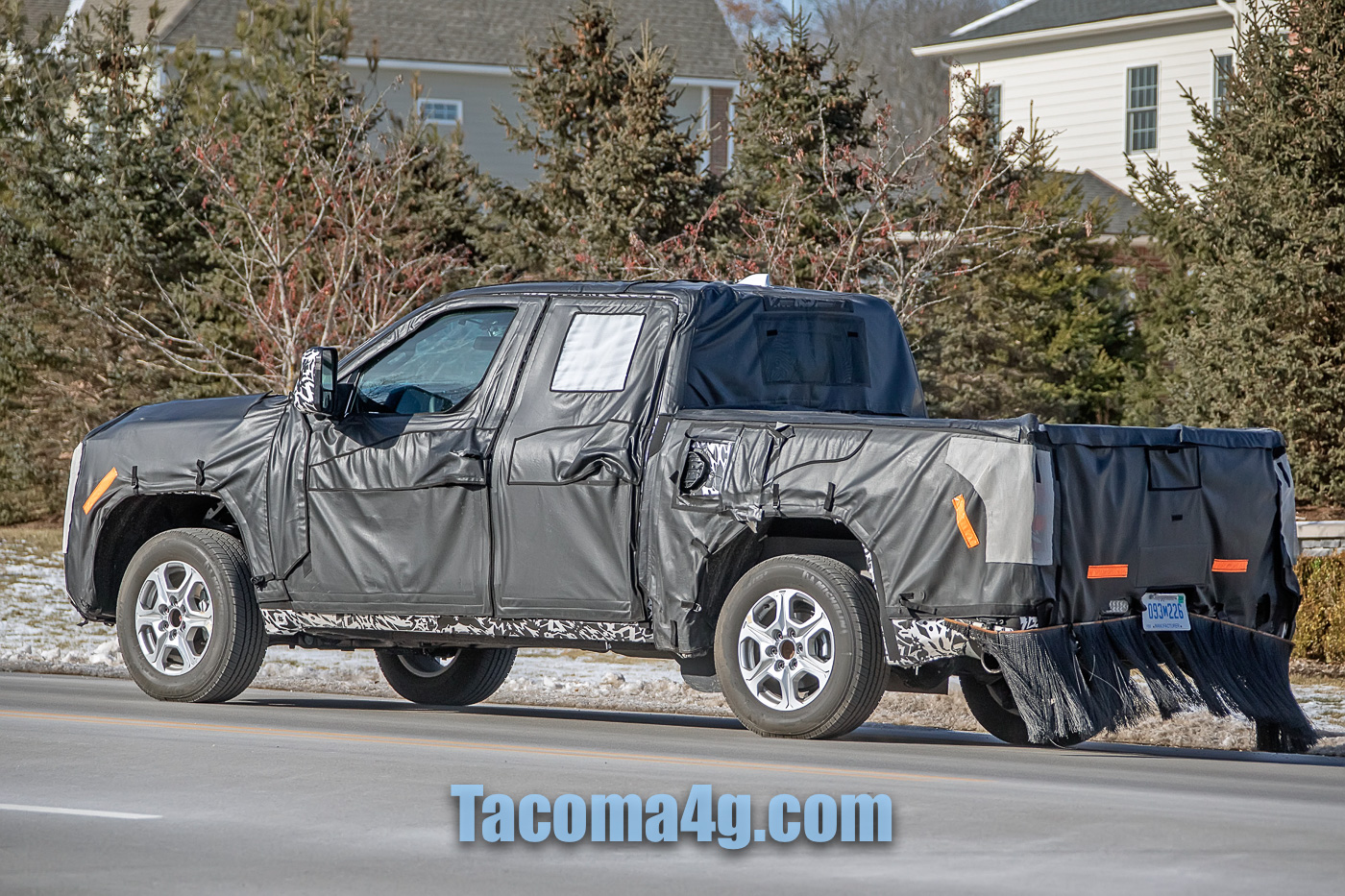 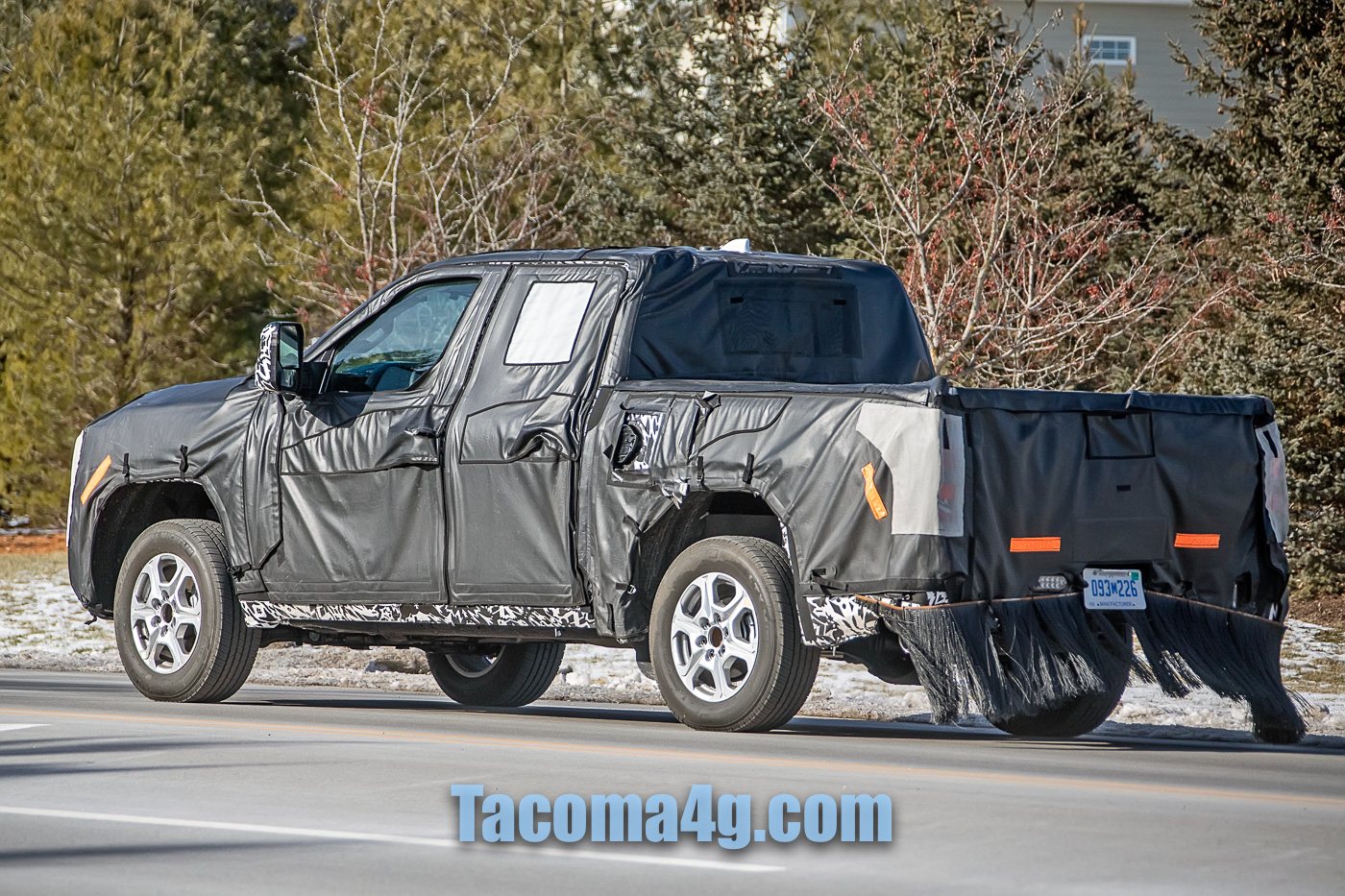 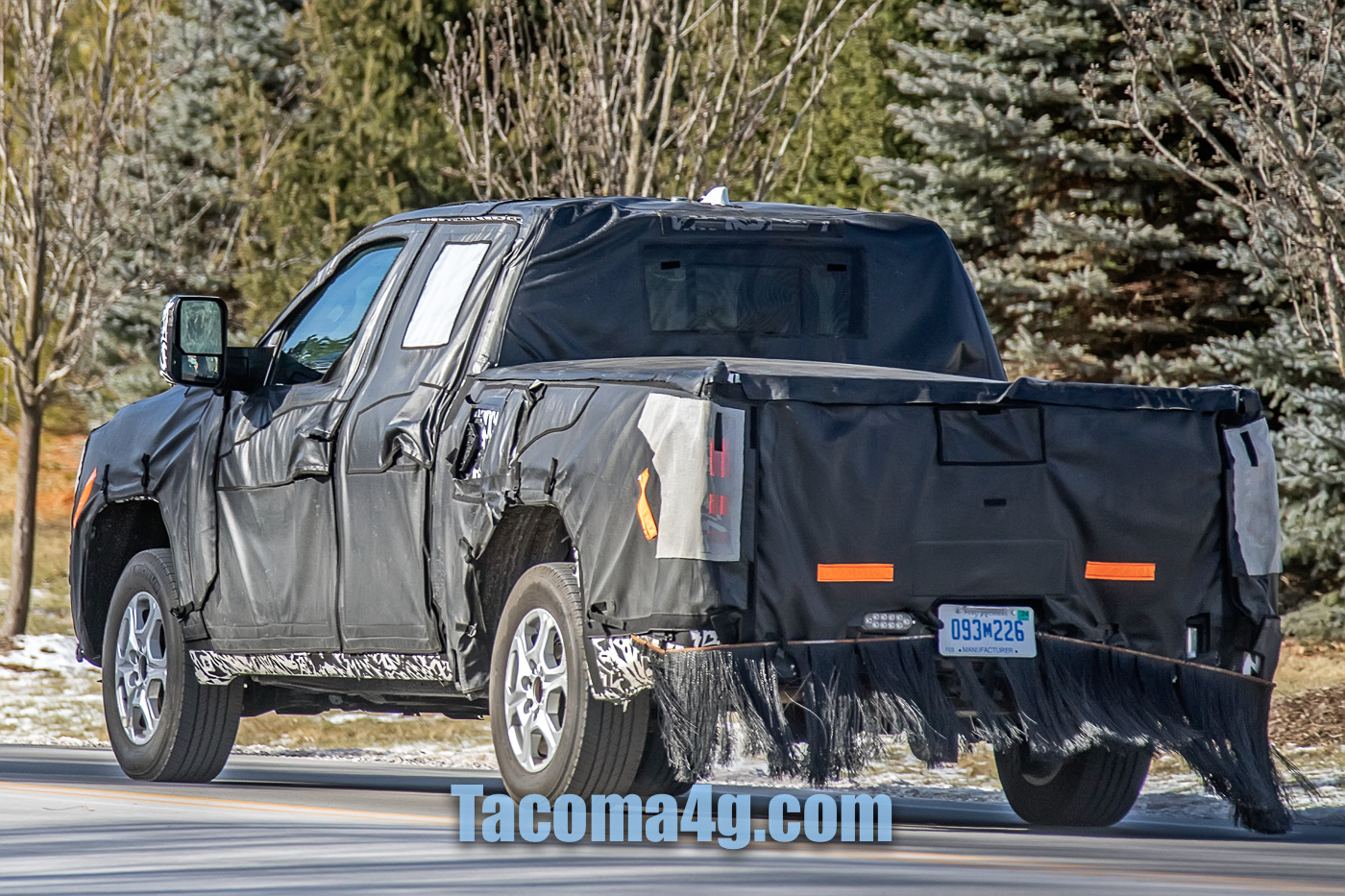 Wow, I didn't know this site was out here, glad I stumbled across it and hope there will be some more traction on it soon.

My question is.... does anyone think this could be the new extended cab version and not the crew cab? That rear door just seems so small compared to the current rear door that looks similar in side to the front door.

My hopes for this truck is that it will have a hybrid geared towards fuel economy and for a crew cab with 38" inches of rear leg room. I drive about 22-23K miles a year and want a truck for the next go around when I replace my current car in early 2023. I am currently leaning Maverick but was hoping for something a bit larger.

So standard Tundra wheelbase is 145.7". The Crewmax w/ 6ft bed is exactly 12" longer. That means a Double cab with a 5ft bed would be 12" shorter, or 133.7". That's 6" longer than a current swb Tacoma, or 7" shorter than a LWB. Based on these pictures, I would expect the new truck to get a bit bigger than the current one.

Mrknowitall said:
So standard Tundra wheelbase is 145.7". The Crewmax w/ 6ft bed is exactly 12" longer. That means a Double cab with a 5ft bed would be 12" shorter, or 133.7". That's 6" longer than a current swb Tacoma, or 7" shorter than a LWB. Based on these pictures, I would expect the new truck to get a bit bigger than the current one.
Click to expand...

Thanks for the info. I am hoping for a bit bigger and a few other things. While I have always liked the look of the current one, I have never been a fan of the inside (seating, dash, size)
You must log in or register to reply here.
Share:
Facebook Twitter Reddit Email Link
Top